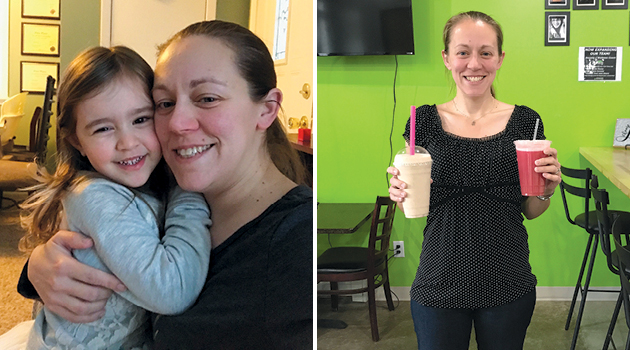 Is getting enough exercise and eating right on a regular basis really easy for anyone?

Add in the enormous feat of carrying and birthing a baby (or even babies!) and it can feel monumentally more challenging.

As a new parent, you have few #adulting assets — no sleep, no time (relative to your recent past), no money (in many cases) and no free child-care fairy (or grandparent).

If you’re a working, commuting parent, dream on.

Add in a dash of guilt about the very thought of taking care of yourself (instead of your kids or spouse), and you’re doomed.

And I’m not just talking about mamas. Dads suffer much of the same fate.

Now, wait a few years (or eight) as you grind through the physically and emotionally demanding toddler and early-elementary years, and watch as your metabolism begins to plummet.

What can you do?

You can stop making excuses and — in the immortal words of Nike and Shia LaBeouf — just do it.

Find your thing. And then, when you inevitably lose it or it changes, find it again.

It feels impossible, I know.

But it’s not. I know because I’ve recently seen two millennial moms take charge of their health amid real challenges.

And their stories seemed to me like the definition of #adulting.

They’re my friends and co-workers at Minnesota Parent, Val and Dani.

They both lost significant amounts of weight — 17 pounds for Dani and 33 pounds for Val.

How? They used the Herbalife shake program. (Note: This article isn’t about HOW they did it. It’s THAT they did it.)

The most striking story is that of Val, a 37-year-old mother to toddler twins (turning 2 in October) and a 4-year-old daughter.

After her twins were born, she was exhausted and depressed, despite the joy of her healthy wonderful tots, a rock-star husband, gainful employment and relative stability.

Due to her multiples pregnancy, she had suffered severe diastasis recti (a separation of the ab muscles), which meant she couldn’t even do a sit up without her intestines visibly pushing outward. She had to wear a belly band every day, even at home, to even stay put together.

She hid her body under big sweatshirts.

“At first, it seemed like my insurance wouldn’t help me try to fix the issue. Meanwhile, I continually made poor food choices. I remember thinking, ‘What does it matter what I eat if I’m going to look pregnant forever?’”

Eventually, Val had a surgery to repair her abs. (Insurance covered all but $2,500.)

But that didn’t help with all of the weight she gained consuming “frappuccinos and donuts for breakfast, crackers, candy and too much pizza.”

Then something awesome happened.

“In March of this year, I finally decided to start #adulting and take care of myself,” Val said recently to one of her online MoMs groups. “At my annual exam with my OB, I asked about a mammogram.”

(Though she’s only 37 years old, there’s a history of breast cancer on both sides of Val’s family.)

She also requested a referral to a gastroenterologist to help with her constipation issues (a common problem after pregnancy) as well as a referral for physical therapy to help her retrain her core body muscles.

“I also started to think about my health and weight,” Val said. “I was depressed with how I looked and felt miserable and tired all the time.”

Then Val started watching Dani, another busy mom, sitting 4 feet away from her, drinking shakes, eating apples, nuts and string cheese (instead of Cheez-Its).

Dani, who learned a ton about nutrition, was falling back in love with her own body. She, a mother to a 2-year-old boy, had more energy and loved what she was eating.

“Meanwhile, I was sitting at my desk eating junk food all day. I felt miserable, tired and constantly hungry.”

So Val did it, too. It started with the Herbalife three-day trial. She loved it, so she kept going and never looked back.

Even though it involved letting go of processed foods and treats (which were all around her, all the time, at home and work), she just DID it.

She went down to a size 4 and lost 33 pounds and 30 inches off her body and reduced her body fat by 10 percent — in four months. I won’t lie: She was religious about her regimen. She resisted temptation constantly. She took pictures of the desserts and carbs she didn’t eat. There were lots. 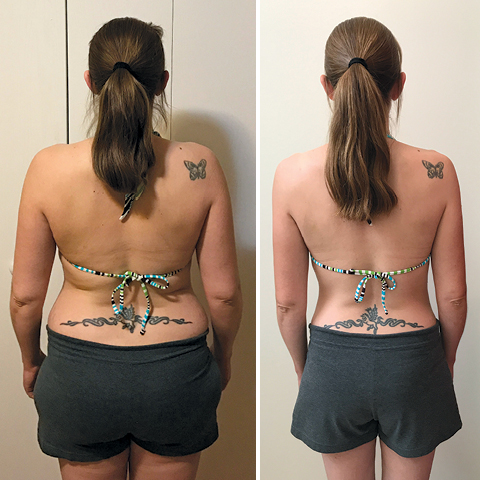 In four months, Val lost 30 inches from her body, including 12 inches off her waist and hips.

Along the way, she gained energy and confidence and even summoned up the courage to seek a promotion. (She got it.)

Her new nutrition plan helped with her constipation issues as well.

“I feel amazing,” Val said. “I never thought I’d be able to feel this great and fit into size 4 jeans after having twins.”

We’re talking about a stressed-out, full-time working, commuting wife, and a mother of a preschooler and toddler twins, who had no time, no budget and no energy either.

But she found her thing. And she sucked it up and did it. She stopped making excuses about her lack of self-care. She’s attending physical therapy regularly and looking forward to starting an exercise program via Wii Fit. Wow.

Adulting looks different for everyone.

It might mean yoga, barre, walking, marathon running or Weight Watchers, Keto, Paleo or taking up a new sport you’ve never done before: Tennis, anyone? (That’s my story for another time.)

It might start with a simple doctor appointment or an inspiring fellow parent in your midst — or it might begin with this very article.

Just do it. Adult yourself.

Sarah Jackson is the editor of Minnesota Parent. Val said if we mention Herbalife results, we have to add this: “People who use Herbalife Formula 1 twice a day as part of a healthy lifestyle can generally expect to lose around 0.5 to 1 pound per week.”