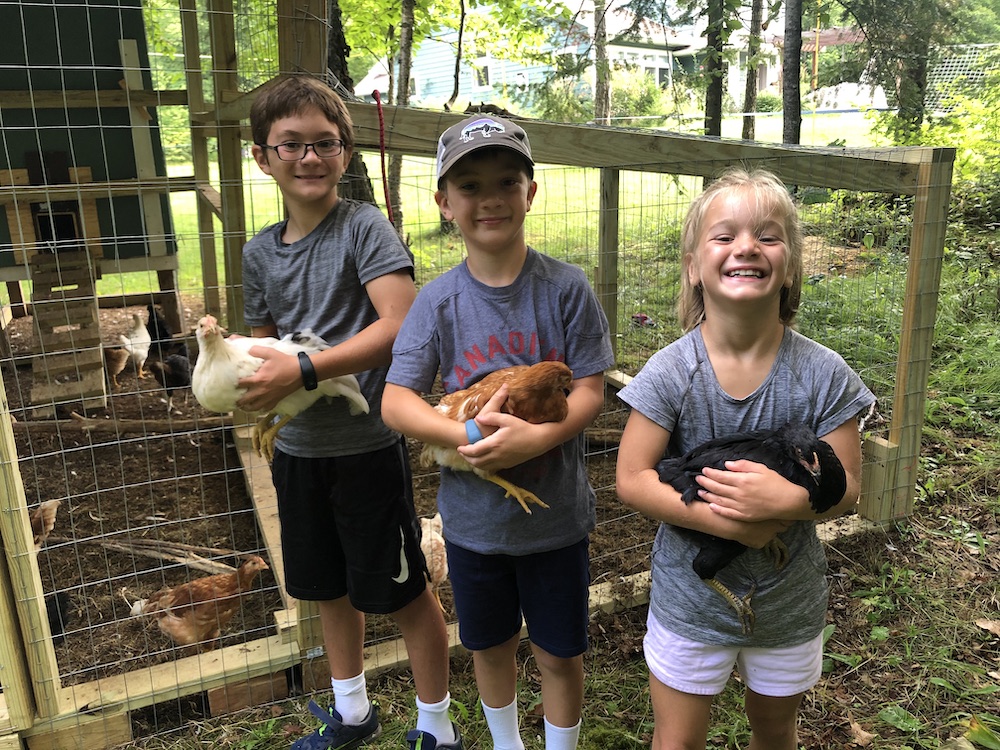 For a handful of frigid, frosty days at the start of 2019, Hallie and Jon Olson traded in the crowded, twisty streets of their Linden Hills neighborhood for a week at Hallie’s parents’ cabin in Bayfield, Wisconsin. Hours to relax with their three kids and a chance to unplug from hustling schedules sounded intoxicating. And they were prepared to drink it in. But, something unexpected happened. Hallie and Jon, who have been married for 14 years and spent all of that time in big cities, were surprised to find that all five of them liked small-town living.

“There was just something about that week that got us thinking that moving out of Minneapolis was possible,” 38-year-old Hallie says. “There just seemed to be more room to breathe. Life was simpler.”

Hannah and Sven Hoaglund understand that simplicity. When they swapped their suburban La Crosse home for an off-the-grid cabin in the woods in 2016, Hannah had some doubts. Now, four years later, the 36-year-old can’t imagine returning to urban life.

“Our neighbors were just feet away. We were packed in tight,” Sven, a Maple Grove native and independent sales rep for a handful of outdoor brands, recalls.

Both of these families took a chance on change by trading in urban living for green space. Research suggests that now more than ever, because of the global pandemic and trend of working from home, more people are following suit — swapping traffic, crowds and sky-high rents for fresh air, chickens and gardens.

“Jon had a pretty lousy commute that could take up to an hour. That, paired with long days in the office, never left us enough time,” Hallie says. “Jon started dabbling with the idea of working from home and his employer was receptive. Without that flexibility, we’d probably never have pursued a move.”

With remote work a possibility (which, by the way, has grown by 173 percent since 2005, according to the Center on Rural Innovation), the Olsons pulled out a map, circled a few ideal parts of the state and combed through a list of houses online. One, about 15 miles southwest of Duluth, caught their eye. Nestled on five acres of land just steps away from Jay Cooke State Park, the custom-built home featured a stone fireplace and mudroom with built-in lockers. Hallie and Jon made an offer.

“The house was perfect, but what we really loved was the land,” Hallie says, noting that her backyard in Minneapolis was no bigger than a laundry room.

Even though Hallie still misses raspberry scones from Great Harvest Bread Company on Upton Avenue, this new life allows her to slow down a bit. She’s made a change in her career, too. Last fall, she enrolled in nursing school.

“We feel so lucky to be where we are. The kids can spend hours outside,” she says, mentioning the dozen nibbling chickens and a rustic, homemade treehouse. “And, with COVID-19, we don’t feel as restricted in what we can and can’t do.”

Mark Rembert, head of the Rural Innovation Network at the Center on Rural Innovation, says while it could be months before we know the pandemic’s impact on urban and rural areas, COVID-19 is fundamentally changing the appeal, necessity and feasibility of living in a big city.

“We don’t know yet if an increase in remote work will result in people leaving big cities,” Rembert says. “But, surveys have shown that many people who live in metro areas would actually prefer to live in rural spaces. Remote working could create opportunities for more people to make that move.”

Hannah, mom of two, would agree. She sits by a bonfire, roasting a hot dog for her five-year-old son as her toddler chases a cluster of chickens. While living in the woods 40 miles south of Grand Marais, she’s managed to be present for her family and (with the help of a signal booster and satellite internet) grow a successful graphic design business.

“Living in Cook County has normalized our passions for making a living doing what we love,” Sven says. “This community is made up of entrepreneurs and go-getters, all trying to carve out a life on their own terms.”

Matt Dunne, founder and executive director at the Center on Rural Innovation, recently wrote about how COVID-19 is impacting the rural workforce. “Companies are realizing that innovation can happen wherever there’s broadband availability,” he wrote. “Workers are reassessing whether urban congestion trumps small-town scenery.”

As we look out over the Hoaglunds’ expanse of green trees, blue sky and fresh air, watching kids wrangle chickens and eat roasted hot dogs, the appeal of rural living definitely seems to have some staying power.

Maggie Sonnek and her family swapped urban living for green space in 2017, leaving the Twin Cities and moving to Wabasha. Although she still misses chai tea lattes from Starbucks, she loves her small town nestled between rolling bluffs and the Mississippi River. Learn more about Maggie and her writing at millcitycreativempls.com.