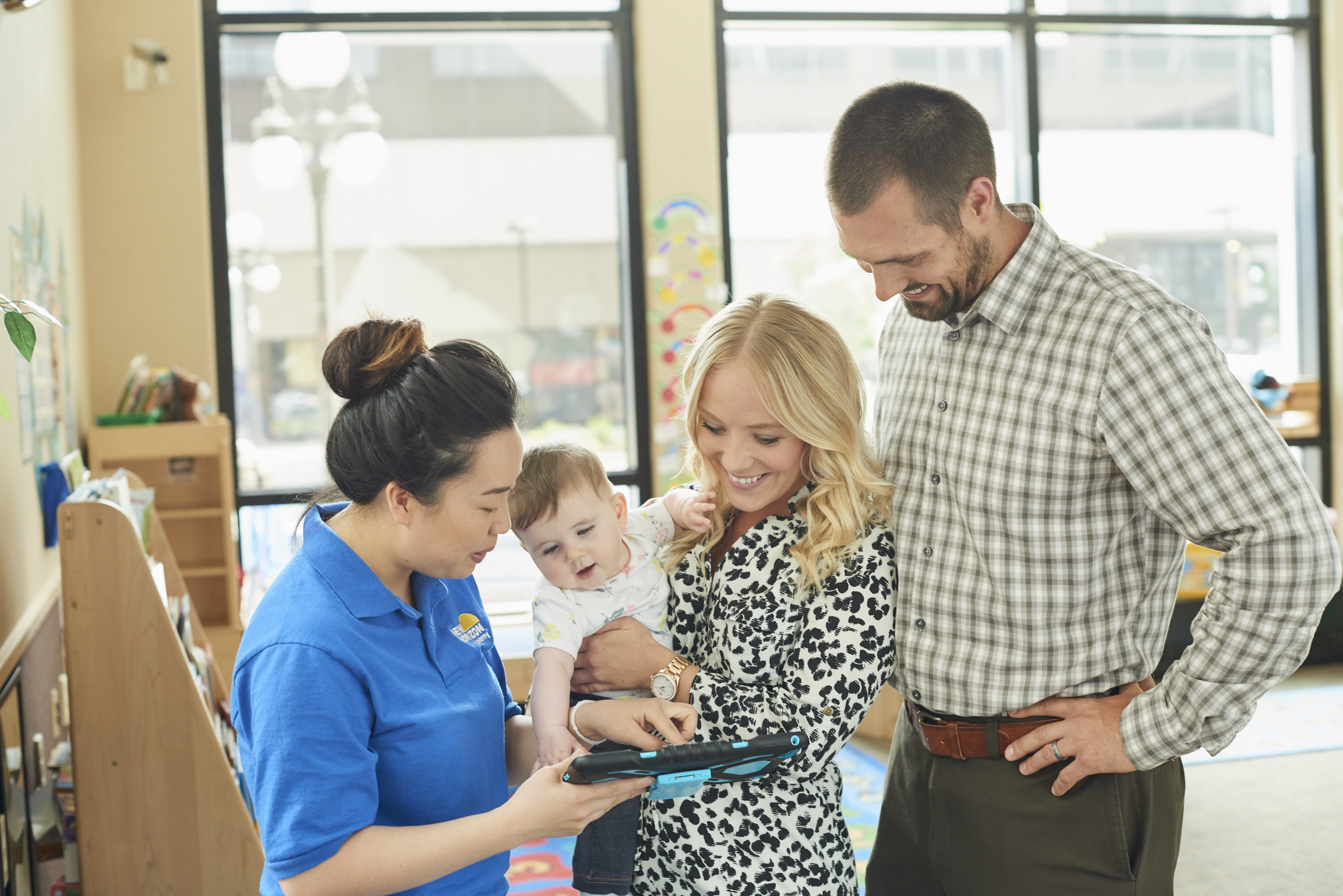 I say to my 4-month-old as I scoop him up from the playmat at daycare.

It’s been a solid eight hours since I kissed his rosy cheeks goodbye, but I already know so much about his day: I know he pooped at 10:35 a.m. (whew!), drained three 6-ounce bottles (growing boy!) and took two naps (9:45 a.m. and 2:30 p.m.) — the dreaded catnaps, but hey, at least he slept. I also know he enjoyed an afternoon stroll outside, as evidenced by a snapshot of him smiling in the buggy.

How do I know all this?

Well, fortunately, our childcare center uses a mobile app that enables teachers to give parents real-time updates of their child’s day — and it’s not the only one. All across Minnesota (and the country), childcare centers are diving into the digital age as a way to streamline and simplify communication between parents and staff.

“We were kind of ahead of the curve in using an app, but it was just the right thing to do for families,” said Cara Johnson-Bader, the vice president of marketing and parent experiences for Plymouth-based New Horizon Academy, which operates 74 centers in four states.

“Our young families want information right away, and this was the route to go,” added New Horizon Academy marketing manager Katie Heruth, who helped roll out the Daily Connect app (screenshots, above) for New Horizon locations in 2013.

Meanwhile, in Bloomington, another childcare center has embraced the digital era — Kinderplatz Childcare & Education Center, which started using the Tadpoles app in 2014.

Switching to electronic reporting has not only eased communication — it’s also given centers an eco-friendly boost, said Kristi McKee, assistant director at Kinderplatz.

“Reducing the amount of paper we use also reduces the amount of ink we need to purchase, which ultimately saves us money that can be used toward improved child programs, staff training and furniture and equipment purchases,” McKee said.

For parents, these apps often act as a digital observation deck, inviting them into the classroom throughout the day. In addition to offering a comprehensive daily report sent via text or email at the end of the day, many daycare apps also enable parents to receive real-time updates.

Teachers can grab one of the classroom’s tablet devices to quickly log diaper changes, bottle feedings and nap times, which parents then receive via email or mobile alerts.

“Daily Connect has done a lovely job of bridging the gap from home to school,” Johnson-Bader said. “Obviously, children are the priority, so teachers respond when they can, but it really is a nice bridge for that communication.”

Beyond diaper blowouts and bottle feedings, these apps can also be used to invite parents into their child’s daily learning, especially for toddlers and preschoolers.

If children are engaged in a STEAM activity, for example, teachers can take photos and send them to families to document the special learning that’s taking place based on the curriculum in the classroom. 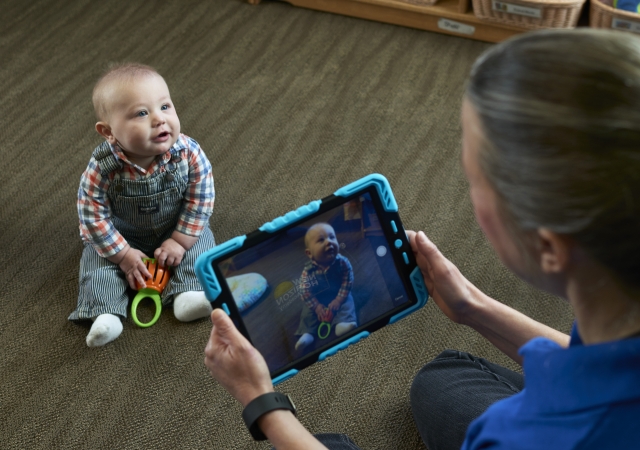 Peace of mind — at home and abroad

Getting on-the-go messages and photos can ease the mind of anxious parents — especially if their child just entered daycare or is transitioning to the next classroom.

“If a parent drops off their toddler and he’s crying because of separation anxiety, five minutes later the child may be engaged in activity,” Johnson-Bader said. “The teacher can snap a photo and send it to Mom to let her know he’s having a happy day.”

For parents who travel for work, the real-time updates can make the time away feel less isolating, Johnson-Bader said.

“A mom who was traveling extensively was missing her child, but getting updates on Daily Connect made the trip much easier,” she said. “The teachers were aware she was traveling, so they made sure to send her a lot of updates.” 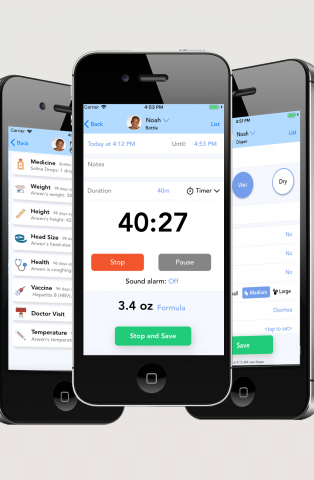 Whether it’s teachers wrangling squirmy limbs during diaper changes or parents rushing off to a meeting, it can be difficult to step aside for a call every time information needs to be relayed.

Luckily, these apps make it fast and easy to send notes back and forth. Parents can quickly alert teachers about things like an early pickup, late drop-off or that Grandma will be picking up Henry today.

“I’ve used the app to request that they give my little one her inhaler around lunch time if I forgot to ask them at drop off, or to let them know that I was able to make a doctor’s appointment in the afternoon,” said Emily Vonder Haar, whose daughter, Anna, attends Kinderplatz.

Likewise, teachers can quickly send notes to parents — “Ava is running low on diapers.” — or create action items that appear on the parents’ dashboards in red until they’re addressed.

“It’s much easier to communicate about the child’s day through Tadpoles, versus having to write out everything by hand,” said Annalissa Hansen, a teacher in the infant classroom at Kinderplatz.

Another teacher at New Horizon in Bloomington agreed: “I believe this is a far better method for parent communication versus handwritten daily sheets. It is much easier and more convenient for teachers.”

While many activities are logged in real time, teachers can do even more entries during nap time.

Teachers at Kinderplatz said they like the administrative portal of the Tadpoles app because it allows staff to quickly send urgent, center-wide alerts to all families in the event of an emergency or unexpected closing. Childcare apps also allow teachers to quickly access each child’s medical, allergy and approved-guardian information from one centralized location. 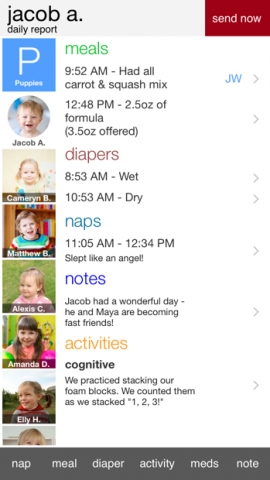 For toddlers and preschoolers, the apps’ daily activity reports can be a great conversation starter — a kickoff to that car-ride talk or dinnertime chat. Instead of asking vague questions (which often result in equally vague answers), parents can use the daily report and photos to initiate more meaningful and personalized discussions.

“I feel more engaged in my kid’s day,” Vonder Haar said. “I am able to ask questions and ‘surprise’ her that I know what she has done.”

Both the Tadpoles and Daily Connect apps allow teachers to snap and send photos (or in some cases, even videos) of kids throughout the day — a feature that wins over the hearts of many parents.

“It certainly puts us at ease, seeing his smiling face and knowing he is keeping active and engaged,” one mom said. “It’s easier to leave him when we know we’ll be getting updates each day.”

Some parents download the photos for personal use, as well as revisit photos from past weeks, months or even years with the app essentially becoming a chronological digital photo album for their child.

Some apps come with additional safety precautions regarding photos.

For example, Tadpoles disables the ability to download a photo if it also features other parents’ kids. Administrators can also opt to approve all photos before they’re shared.

For New Horizon’s Daily Connect app, parents can sign a release allowing (or declining) New Horizon’s authority to take and post photos of their child through the app.

“The teachers are very mindful of that when they take photos,” Johnson-Bader said. 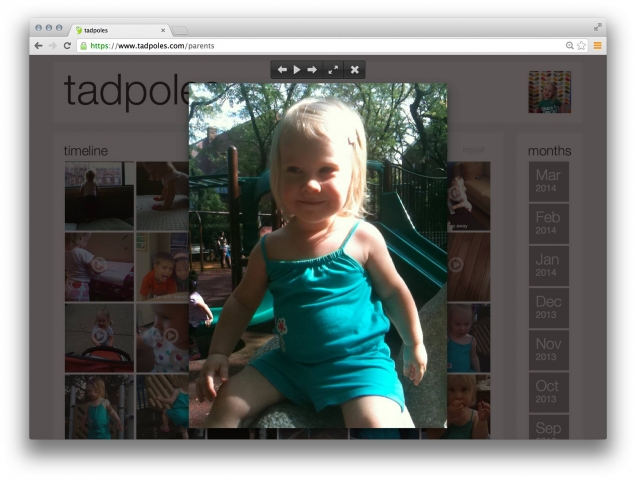 Can an app save a life?

With daycare apps, parents can log their kids’ feeding and naptime data at home, too, to get a better picture of overall trends in eating, sleeping and toileting.

This information — what time a child woke, ate or had a diaper change — can help caregivers know when to give the next meal, nap or fresh diaper. Apps can even be used to track nursing/pumping, doses of medication, vaccinations and data (height and weight, for example) from doctor appointments.

Other caregivers, such as grandparents and other interested parties, can be added, too.

The Tadpoles app also includes a new Unexpected Absence function that sends an alert if a child hasn’t been checked into daycare yet.

Inspired by the work of mother and advocate Karen Osorio and the Sofia Foundation for Children’s Safety, the feature allows a parent to select a time (such as 9 a.m.) at which they would like to be alerted if their child hasn’t been checked into daycare yet.

The goal? To prevent children from being accidentally left in the car, which can turn into a dangerous situation.

“I really like the new feature about check-in times,” Vonder Haar said. “It’s a great relief to know that is my double-check if something is wrong.”

Rachel Guyah is a Bloomington-based writer and mother of two young boys. See more of her work at rachelguyah.com.