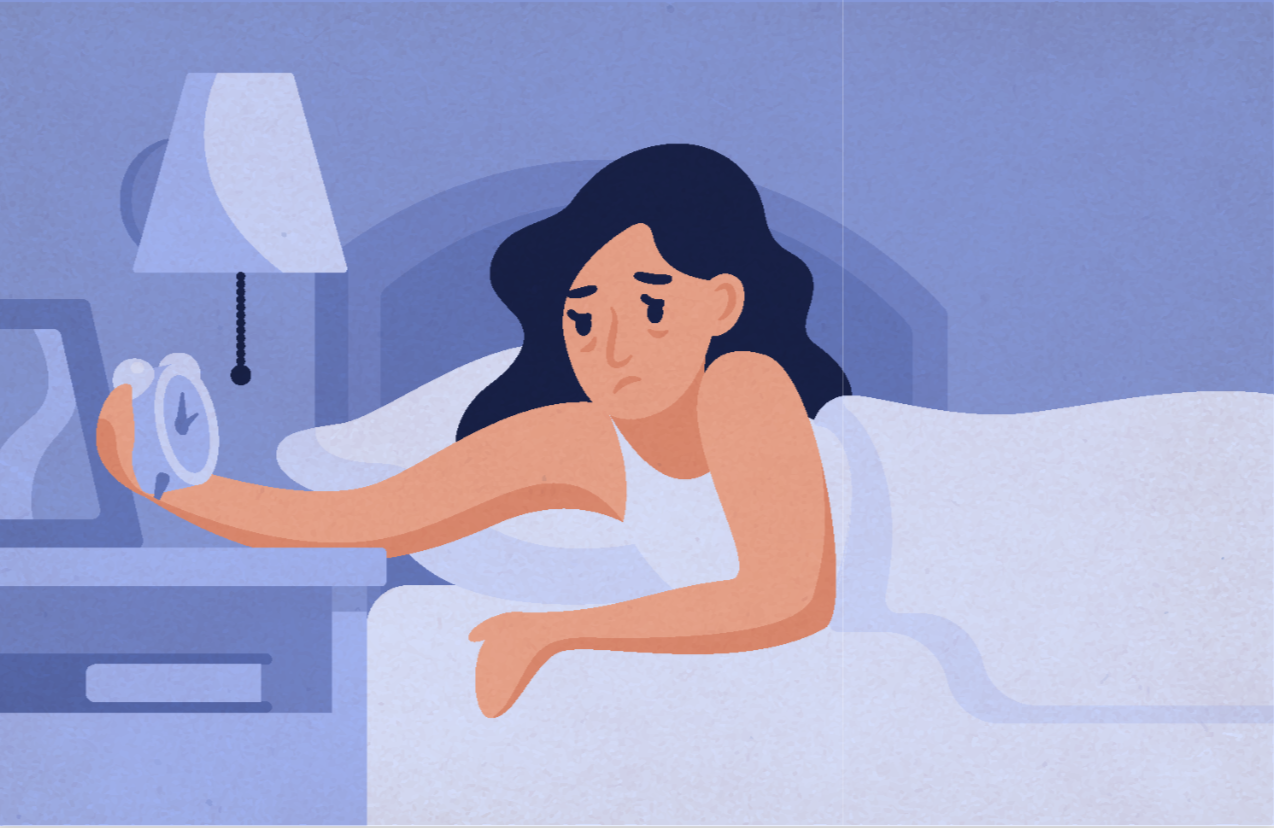 I suppose it was sometime after 2 a.m. when I found myself curled up in the corner of my bedroom closet, clutching my phone as I contemplated driving to the ER.

Six hours had passed since I locked myself in the bedroom. Exiled from my husband, preschooler and 5-day-old newborn, my mission was simple: Sleep.

But sleep … it would not come.

Sweaty and shaking, my fingers typed out the fears festering within:

“Can you die from lack of sleep?”

“How long can you live without sleep?”

“Can the hospital give you a drug that MAKES you sleep?”

It was my sixth straight night of virtually no sleep. My body, my mind, my sanity — all were unraveling at warp speed. Like a starving street dog, I slobbered up any scraps of slumber I could scavenge. An hour here. Forty-five minutes (way) over there. I slept maybe 1-2 hours a day that entire first week.

My head throbbed. My eyes burned. My body shivered; then I was sweating, shivering and sweating again. Like a mad, caged bird, my heart banged furiously against my chest — the sound of which sent me into a panic and stole any shot of shut-eye.

I felt broken. Bereft. Betrayed by my own body.

What’s WRONG with me? I thought. Why can’t I just sleep?

When it comes to the seismic shift to new motherhood, few women survive without at least a few sleep scars.

“Sleep concerns are basically universal in new motherhood,” said Dr. Michelle Wiersgalla, a psychiatrist at Park Nicollet who specializes in working with women who have mental health concerns related to pregnancy, postpartum, infertility and reproductive loss.

“Sleep now … while you can!” veteran moms like to premonish pregnant women.

Moms are bombarded with memes and marketing messages that perpetuate — even glorify — the “mombie” image of mothers as frazzled, sleepless martyrs who subsist on a steady stream of coffee and wine.

But the tired-mom trope can make it hard for women to know what’s normal — and more important: not normal — when it comes to sleep issues. And if a new mom’s symptoms spiral into full- blown insomnia, she may simply chalk it up to motherhood instead of seeking help.

Such was the case for Sarah Tucker, a writer, journalist and mom of two based in Los Angeles. “For me, it was really sort of wrapped up in this experience of becoming a new mom,” she said. “It was this horrible feeling of ‘No, actually, you will never sleep again. You’ve had a baby; you’ve become a mother.’”

For some women, insomnia can strike immediately after birth (this was me). For others, like Tucker, it may take weeks — even months — for the fangs to fully sprout. But once they do, the bite can be brutal.

When Tucker’s daughter was about 6 months old, she blessedly began sleeping longer stretches at night. And yet every night, like clockwork, Tucker’s body continued to wake every two hours. And once awake, she’d be up for hours and hours.

“You feel weirdly … broken,” Tucker said. “Your body is just doing something insane, because it’s refusing to do some- thing it desperately needs.” 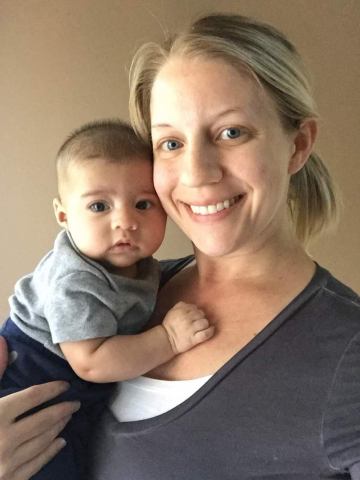 A low point: Days after her second son, Grant, was born, Rachel Guyah suffered from severe — nearly nonstop — insomnia. When Grant was about 3 months old, her insomnia had come back after a brief respite. She snapped this photo anyway so she could remember the time, including the good (her son!) and the bad (her exhaustion).

I, too, had felt broken. It was as if my body had, quite literally, forgotten how to sleep. The concept of sleep became this unnatural, unobtainable prize hovering just above me while I flailed around in quicksand. And the more I chased it, the more it evaded me.

This is common with insomnia, I learned. Once you start losing sleep, your body and your brain get all revved up, which in turn makes it harder to sleep. And the vicious cycle continues.

“With true insomnia, parents may find that they feel excessively irritable or anxious about the sleep problems, and those emotional symptoms can often exacerbate the sleep troubles,” Wiersgalla said.

Your body also becomes hyper-aroused once insomnia takes hold, which can flood your system with cortisol, adrenaline and other stress hormones. The result? Faster heartbeat, shallower breathing and spiked blood pressure, among other manifestations. (Good luck sleeping with all that going on.)

“Being so tired makes you question yourself in a really scary way,” said Tucker. “You’re not sure if you’re perceiving things correctly. You really can’t process your emotions in the same way.”

Tucker said she was afraid to even get in the car and drive (a fear I shared during my descent). In some ways, that fear is valid: Studies have shown that getting behind the wheel while sleep-deprived can be as dangerous as driving intoxicated (!).

The next day I called my OB, sobbing, and begged her for Xanax. (It had helped me through bouts of anxiety in my early 20s.) She prescribed precisely one pill — and instructed me to see her the next day.

That night, I swallowed the pale orange pill and waited for relief to set in. Within 20 minutes, I felt the panic and palpitations flee my body. A sense of calm cradled my skin. When I crawled into bed, something amazing happened: I actually slept. For four glorious hours. I wept like a baby, overcome with relief.

But my road to recovery was long. This was only the beginning.

I saw my doctor the next day, who hugged me and prescribed more Xanax until I could see the psychiatrist a few weeks later. (I think we were both scared I might need to be admitted if I didn’t start sleeping again ASAP.)

Once I saw the psychiatrist, we switched to Klonopin, another benzodiazepine, (a class of drugs known to relax the brain, muscles and nervous system). Showing compassion and concern, she agreed we needed to bust out of this cycle of insomnia, for the sake of my sleep, health and sanity — even if that escape plan included a prescription (for now).

Over the next two months, I continued to sleep, but only 3-4 hours a night. The pill knocked me out for a few hours, but once I awoke, I’d immediately be on alert — eyes open, heart pounding, mind racing. I’d lay in bed for hours, then surrender shortly after sunrise.

I never really knew how much sleep I was going to get — or if my body was even going to let me sleep. This relentless uncertainty terrified me and wreaked havoc on my (already fragile) postpartum state.

Apathy, anger, sorrow, panic — I felt these, deeply, on a daily basis. The slightest hiccup in my day (Baby won’t nap! We’re out of yogurt!) would leave me shattered.

I gave up breastfeeding and my husband took over all night feeding shifts — a decision that still haunts me with guilt. During the day, he and my mother swooped in to help care for both boys, as I was basically useless.

A couple months in, my sleep nosedived further, despite increasing the dosage of my medication several times to try and combat it.

At the same time, I became terrified of being shackled to a potentially highly addictive medicine that wasn’t even helping all that much (anymore).

Desperate, I met with my psychiatrist who introduced another medication, Remeron — an anti-depressant with sedative properties. She also wisely recommended cognitive behavioral therapy (more on that treatment option below).

While on Remeron, I still woke, like clockwork, after the first 3-4 hours. But this time, my body could actually fall back asleep. It was a light, restless sleep, punctuated by several wake-sleep cycles, but at least I could fall back asleep.

Clocking in 5-6 hours of sleep each night, I felt my sanity and sleep confidence slowly returning. I started to feel human again — an exhausted, fragile specimen
of one, but a human no less.

Maybe I’ll claw my way out of this nightmare after all, I thought.

No one knows for sure what causes postpartum insomnia, though it appears many factors may be at play. For some women, it’s the hyper-vigilance and anxiety of having to care for such a tiny, helpless being.

Newborns’ erratic, round-the-clock schedules can also really mess with a mom’s circadian rhythm, the internal body clock that regulates daily sleep-wake patterns. Lack of exercise and sunlight can throw off sleep patterns, too.

Hormones may play a large role as well: For example, allopregnanolone, a metabo- lite of progesterone, has been shown to promote relaxation and sleep by acting on GABA receptors in our brain.

“GABA can be thought of as a brake pedal for the brain,” said Wiersgalla. “Substances that act on GABA often cause some degree of drowsiness and/or reduce anxiety symptoms.”

This may explain why many women feel so tired during the first trimester, when progesterone rapidly rises. Fast forward to after delivery, when progesterone levels rapidly plummet the first 24 to 48 hours. This dramatic drop may trigger sleep and mood disturbances for women, particu- larly those who may be sensitive to hormonal changes.

Speaking of hormones, roughly 5 to 10% of women experience thyroiditis, or inflammation of the thyroid gland, in the months after giving birth. Thyroiditis can make the thyroid become both overactive (hyperthyroidism) and underactive (hypothyroidism) — the former of which can cause anxiety, hot flashes, rapid heartrate and — yup — insomnia.

On the mood front, research has revealed a strong, reciprocal link between insomnia and postpartum depression/ anxiety: People with postpartum anxiety or depression often have insomnia as a symptom — and conversely, insomnia can in turn worsen symptoms of anxiety and depression.

Whether insomnia is the chicken or the egg, it’s important to get it addressed. 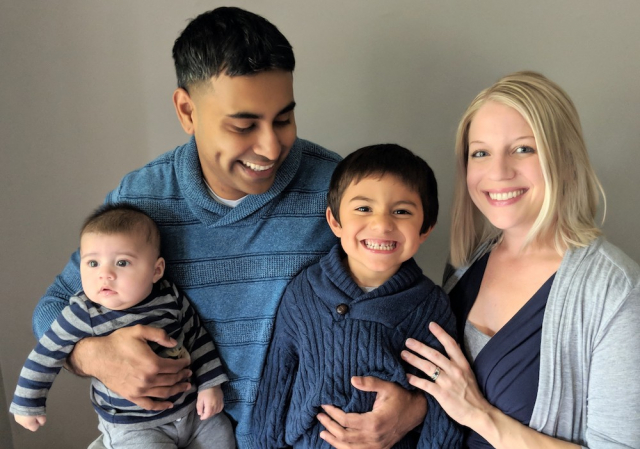 A bit better: A month after the low point picture, Rachel Guyah was starting to feel more like herself, but she still wasn’t back to normal. As a birthday present to her mother, she participated in a photo shoot with her husband, Tim, and sons, Grant, 4 months, and Hendrix, 4 years.

My own road to recovery started with prescription medication, but key lifestyle changes helped yank me out of it.

But here’s what I did:

For Tucker — whose own recovery attempts included exercise, acupuncture, Ambien and medical marijuana — working with a therapist who specialized in CBT-i (cognitive behavioral therapy for insomnia) became the golden ticket.

“She was amazing,” Tucker said. “She absolutely cured me.”

CBT-i is a fairly new treatment option for insomnia, but research is revealing it’s incredibly effective. With CBT-i, patients track their sleep patterns and habits, after which the therapist crafts a personalized treatment plan utilizing various techniques.

Techniques might include things like relaxation training and biofeedback, stimulus control, sleep restriction (limiting time in bed) and many others.

Learning good “sleep hygiene” is another component of CBT-i, and some- thing I implemented in my own recovery.

Tips include limiting caffeine and alcohol; keeping a consistent bedtime; exercising regularly; and keeping your room cool, quiet and dark.

If you do go the medication route, it doesn’t necessarily mean you have to end your breastfeeding journey.

“There are lots of medications available to treat insomnia, and many are safe enough to take during pregnancy or breastfeeding,” said Wiersgalla.

Once sleep starts to improve again, it can often “retrain” the parts of the brain that regulate sleep, and you can taper off the medicine after a while.

A message of hope

I’m now 18 months out and nearly (but not fully) 100% recovered. I’m happy to report that most nights I don’t even think about sleep. It just happens.

Insomnia plunges you into total darkness. But that doesn’t mean you have to stay there.

“It’s not normal. This is not what motherhood should be,” Tucker said. “If something isn’t working, keep looking. Because there’s gotta be a way.”

Rachel Guyah is a Twin Cities-based writer and mother of two young boys. See more of her work at rachelguyah.com.