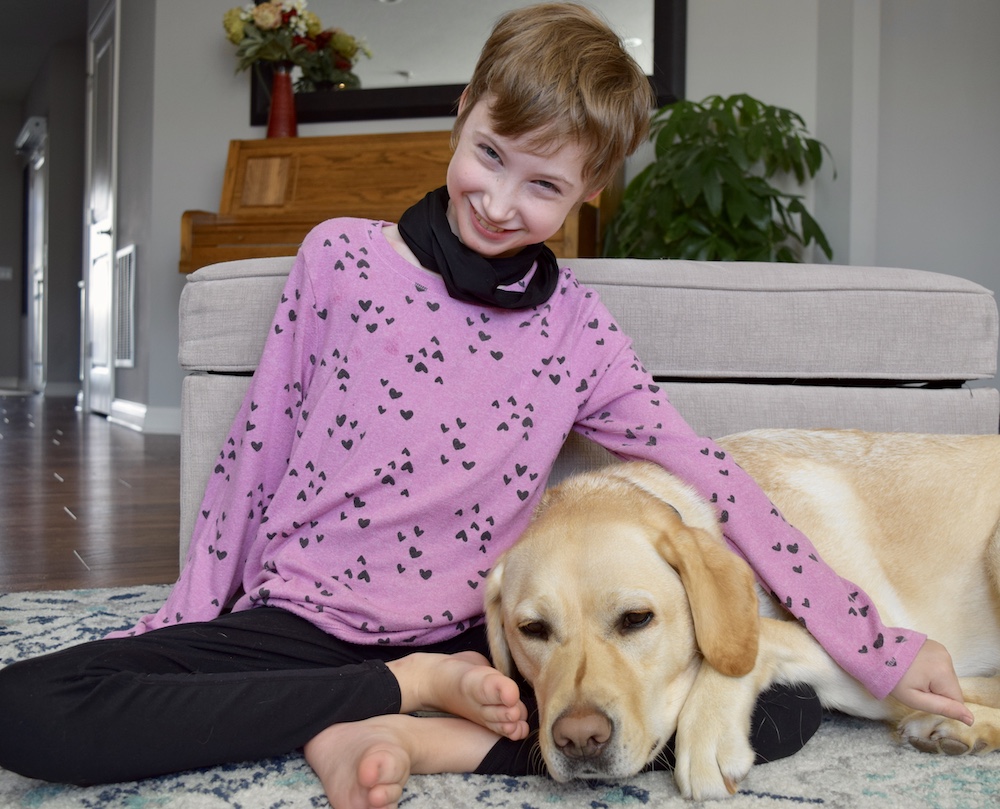 Trying to get a 70-pound Labrador to pose for a photo is no easy task. The Labrador, Gregg, only wants to look at his companion, Brea Vandergon, not at the camera.

Brea’s father, Cedar Vandergon (attempts to get the 2-year-old service dog to rest his head on his daughter’s lap. As soon as he removes the portable, speech-generating device from the front of Brea’s wheelchair, however, Gregg uses the opportunity to jump up and give Brea two big, sloppy kisses, knocking over the treat bowl attached to the wheelchair’s side in the process.

“Classic Gregg!” Brea quips, wiping her cheek, and everyone laughs.

This is classic Brea. The 13-year-old New Brighton girl has a quick smile and an even quicker wit. She uses a wheelchair because she has cerebral palsy, a disorder that severely impacts her movement and muscle tone as well as her ability to communicate.

And yet she can communicate with Gregg just fine.

“Gregg immediately began responding to Brea’s communication device giving commands,” he says. “It was really cool to see. He was completely engaged with her — and she with him.”

While Brea’s younger sisters had their hearts set on a guinea pig, Vandergon and Brea’s mom, Julie, decided a service dog would be a better fit for their family, especially with Brea desiring more independence.

A few months later, they welcomed Gregg into their family.

“Gregg is a very eager helper and loves to work,” Vandergon says. “He picks up things Brea drops and places them on her lap. He can open doors with a tug attached, close doors and activate handicap buttons.”

Gregg even puts her clothes in the hamper, which is a big help at bedtime.

These tasks are all part of a regular day’s work for Gregg, a mobility-assist dog specially trained to help kids like Brea have a better quality of life.

He’s one of five types of service dogs provided by Can Do Canines — a Minnesota-based nonprofit organization dedicated to making life easier for people with disabilities by creating mutually beneficial partnerships with specially trained dogs.

Started by Executive Director Al Peters in 1989, Can Do Canines, based in New Hope, provides assistance dogs for people with hearing issues; mobility needs; autism; seizure disorders; and diabetes.

While the bulk of the organization’s clients are adults, Can Do Canines has provided 115 assistance dogs to children since 2007, at no charge to their families. The organization also covers the first two years of shots, exams and food. 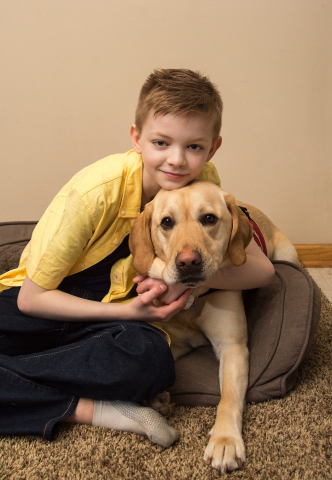 Can Do Canines trained its first child mobility-assist dog in 2002 and became an early provider of autism-assist dogs in 2007.

While the wait for a child to receive a mobility-assist canine companion like Gregg is just a few months, the wait list for an autism-assist dog can be up to three years, which is why the organization recommends families apply as soon as a child is diagnosed.

“These dogs are life-changing to families,” Peters says. “They remove the tension and anxiety and just make life easier.”

On any given day, 200 dogs and puppies are being raised to serve at Can Do Canines. Individual volunteers foster and train the dogs in basic commands and manners, plus crate and potty training. (Can Do Canines also works with volunteers from a local prison program.)

The final stage of training, handled by Can Do Canine’s staff, involves working with the dogs in their new homes. The dogs that don’t get paired with a human become pets or go on to serve other organizations as therapy dogs, also known as emotional-support animals.

Can Do Canines is recognized by Assistance Dogs International — the leading authority on assistance dogs worldwide. Its certification signifies that the facility upholds the highest standards in assistance dog acquisition, training and partnership. In Minnesota, only two organizations are ADI-certified: Can Do Canines and the Hopkins-based Helping Paws.

Helping Paws, started in 1985 as a pilot project of the University of Minnesota’s Center for the Study of Human-Animal Relationships and Environment, became an independent nonprofit in 1988. The Hopkins-based organization provides service dogs for two groups — children and adults with physical disabilities and veterans or first-responders with PTSD.

While many dogs can function as mobility- assist dogs and learn to open and close doors, retrieve dropped objects, pull wheelchairs and more, autism-assistance dogs require a special kind of personality and temperament.

“We say that autism-assist dogs need to be bomb-proof,” Peters says. “Because children with autism can be self-harming and flight risks, the dog must be extremely patient and tolerant.”

Most important, Peters says, an autism-assist dog must possess the ability to remain calm under pressure and love a child no matter how the child treats it.

Autism-assist dogs, like mobility-assist dogs, are trained to provide comfort, support and practical assistance with everyday activities. However, for kids like 10-year-old Gage Gasper of Big Lake and 12-year-old Olympia Quast of Lake Elmo, autism-assist dogs also serve as four-legged bodyguards, providing constant protection to the children not only from outside elements — but also from themselves.

Gage and Olympia both tend to self-harm. Olympia may bang her head on the floor when she gets frustrated. Gage may scratch or pick his skin if he’s feeling overwhelmed.

Before Can Do Canines, a simple trip to the grocery store would at best be nerve-wracking, and at worst, dangerous. The fluorescent lights, crowds and ding of a store might send Gage into a complete panic, for example.

“Gage used to have a lot of meltdowns,” says his mom, Lindsey Gasper. “He was hurting himself and me as well. It was getting to the point where I thought he might overpower me.”

Common outings that most families take for granted — trips to museums, movie theaters or sporting events — were out of the question for Gage and his family.

“We’d be shopping and — right in the middle of the aisle — I’d need to hold him in a tight bear hug to stop him from screeching and scratching his face,” Gasper says.
“I didn’t know what to do.”

That was before Gage had Linus. The yellow Labrador’s uncanny ability to soothe Gage when he’s in distress means the Gasper family, who live in Big Lake, can go to a store or even a restaurant without the usual angst involved in leaving the house.

When Gage does get overwhelmed, Linus nuzzles his neck or sits on top of him and gently applies pressure until Gage calms down.

What Gasper refers to as Gage’s “meltdowns” used to occur multiple times a day. Now, thanks to Linus, they happen only a few times a month.

“We feel a bit more in control when Linus is present, knowing we can utilize his special skills at any time needed so Gage can be as normal as any other kid,” Gasper says.

Linus wears a special harness with a leash for an adult to hold, but it also includes a handle for Gage to hold. If Gage drops the handle, Linus will stop moving to alert the family. Gage can also be tethered to Linus with a belt latch and leash.

Before Mindy, Olympia would bolt away from her parents in stores and rarely sleep through the night. When Olympia would get upset, calming her was always an arduous process.

Olympia now sleeps through the night and calms down quickly when upset. With Mindy by her side, Olympia is also far less likely to wander off.

“When we go on walks, Mindy is linked to Olympia,” Mindy’s mom, Michelle explains. “Mindy really helps in stores to keep Olympia close and slow her down when she tries to get into something or bolt away. Mindy is a constant, calming presence and has had a very positive impact on Olympia.” 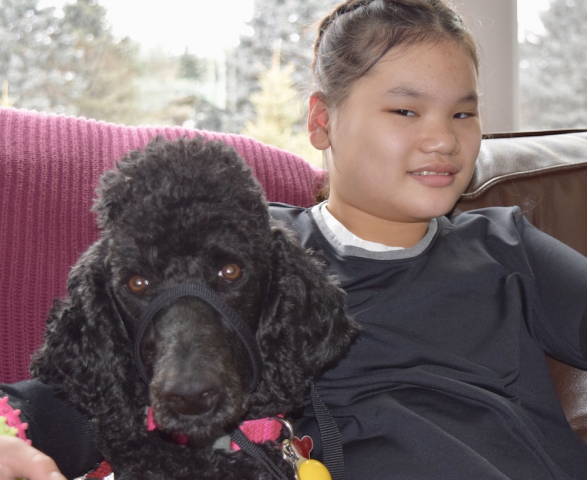 It makes perfect sense why a child on the autism spectrum would respond to and benefit from a service dog. A dog’s intentions are always clear. It’s love, always unconditional. And dogs, unlike humans, are relatively uncomplicated creatures that have a calming effect on their people, especially when they’re raised specifically to respond to signs of anxiety or agitation, as most autism-assist dogs are.

Cedar Vandergon, Brea’s dad, was quick to recommend a service dog, but not for the obvious reasons.

“A service dog helps remove the stigma around the person it’s assisting,” he says. “People are more willing to talk to you when you have a dog.”

Gage’s family has found that to be true also. During Gage’s episodes in public before Linus, empathy was scarce.

“Nobody tried to help us,” says Jon Schreiner, Gasper’s partner. “We got a lot of looks.”

Now with a service dog, wearing a red vest with a Can Do Canines logo, they can not only go anywhere (in normal, non-COVID times) — the doctor, the dentist, museums, theaters, the Mall of America and even Minnesota Wild hockey games — but they also can feel the warmth of others.

Dogs help people socialize more readily. But they also deliver the added bonus of sending a signal that the owner has an invisible special need — and might need a little extra compassion.

Autism-assist dogs can’t be trained overnight. Sometimes it can take a couple years. Teams may include breeder hosts, whelping homes, puppy raisers and others.

Gage started as No. 206 on a waiting list with Can Do Canines. Three years later, he had worked his way up to the top. It then took a while to transition Linus from his foster home to his forever home with Gage.

Though the dogs can cost as much as $25,000 in an open-market situation, Gasper says she paid only a $50 application fee, thanks to the nonprofit organiza- tion’s support.

“We were locked in our house for so long,” Gasper says. “It was worth the wait.”

Tina Mortimer is an essayist and a contributing writer for many local publications. She also happens to have a service dog in her family. Sage, a 3-year-old mobility- and hearing-assist dog helps her father navigate a world without sound. Follow Tina’s work at tinamortimer.contently.com.