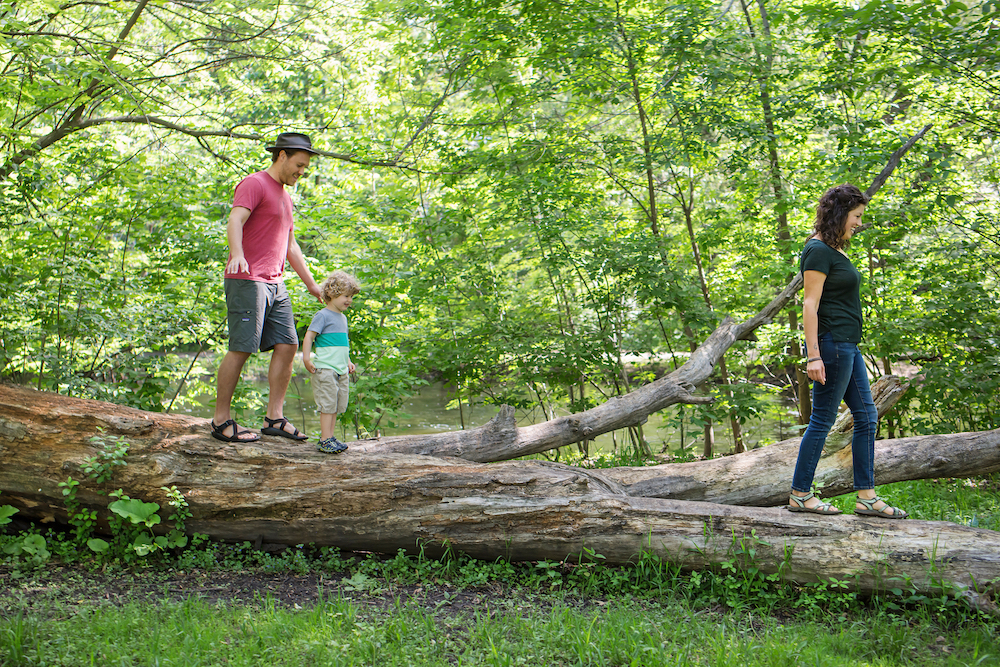 When the Okee Dokee Brothers created their fifth album, they didn’t know COVID-19 was coming. And George Floyd wasn’t a household name.

And yet many of the songs on their magnificent new double-CD set — Songs for Singin’ — seem fully aware that not everything is okee dokee in America.

For the first time ever since winning a Grammy for children’s music in 2013, Joe Mailander and Justin Lansing’s latest album isn’t about an epic outdoor adventure, but rather the humble joys of everyday life, including exploring nature in your neighborhood and making music with friends and family.

“You don’t have to go on a hike on the Appalachian Trail to calm your mind down,” Mailander said. “We wanted to write an album that was more universal and spoke to a lot of different types of families — and was more inclusive. So many songs came out when we did that. We wrote 50 songs. We just chose the 27 best tunes.” 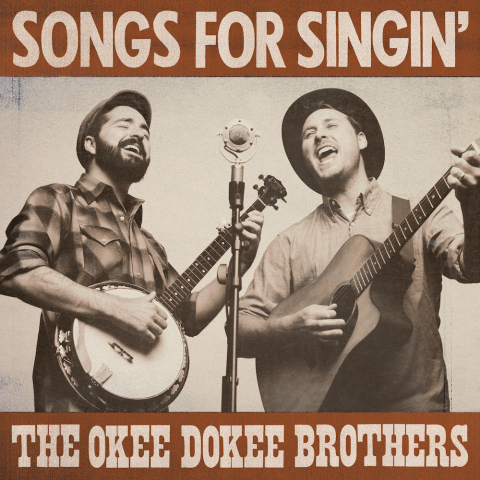 With songs like Afternoon Walk, Early Bird and Church of the Woods, there’s definitely a heavy emphasis on the outdoors.

But families will also find some messages about enduring hard times mixed into the bluegrass-driven music. In subtle ways, the songs tackle climate change (In My Bones), racial justice (If You Want a Song), self-care (Hope Machine) and even the fact that camping really kind of sucks sometimes (Campin’).

The very first of the bandmates’ new songs tells the tale of the “hope machine” inside all of us that we can keep healthy by sticking to our daily routines — brush your teeth, do a push up, sing a song: “They say life is hard, and they’re not wrong. Gotta keep that hope machine running strong.”

It’s a message that seemed to come at just the right time — when family routines went off the rails during lockdown orders due to COVID-19.

The Okee Dokee Brothers, in fact, released their 2-CD set — which includes an illustrated songbook with guitar chords — nearly two months early to give quarantined families something special to do.

As with previous albums from the duo, there are a few songs that hint at the need for social change, including One Little Heart, which could be a protest anthem for kids:

I got two eyes, seein’ lives full of hardship;

I got two ears, hearin’ folks are down and out;

I got one mouth that can speak up for the voiceless;

And I got one little heart that just needs to shout. 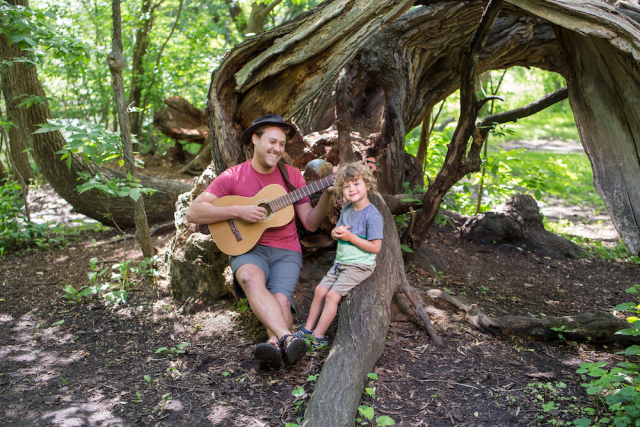 The fair-haired Mailander — who lives with his 3-year-old son, Hap, and wife, Ali, not far from Minnehaha Creek and the site of Floyd’s passing — said he was already concerned about racism and the deepening divides in the U.S. well before police brutality took Floyd’s life.

Due to the increasingly polarized political climate (gently referenced in The Okee Dokee Brothers’ 2016 song The Great Divide), Lansing and Mailander felt it was time to shift things away from their grand outdoor trips toward simpler neighborhood pleasures.

After all, such adventures might be a luxury for some families.

“What we’re trying to do is find common ground,” Mailander said. “The more we can get together, the more we realize we have a lot in common — singing together and talking about things that do connect us, rather than the things that divide us. Woody (Guthrie) and Pete (Seeger) were really good at that.”

That’s why the two new CDs — one themed Day and the other Night — include songs about creating your own local singalong (Neighborhood Band), putting on a Louisiana-style feast (Jumbo Gumbo) and having playful Friday-night gatherings (Raise a Ruckus).

“Eighty percent of the album is very singable,” Mailander said. “One of our biggest thoughts going into this album was just making sure the choruses and different refrains were catchy enough that people could catch on quickly.”

And people have been catching on in droves with families sharing videos of themselves using the song book’s guitar chords to do just what the brothers had suggested: Get together. Play instruments. Sing. You don’t have to be good. Just have fun.

One little boy, dressed up in signature plaid like the darker-haired Lansing, put on a sensational and adorable cover version of Hope Machine. 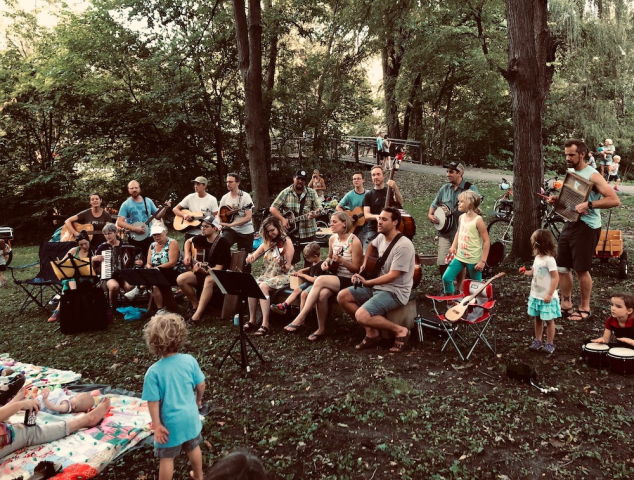 It’s been a dream come true for Mailander, recalling the days when more people were involved in music at home, but also through churches, community dances and other cultural activities. With summer here — but coronavirus keeping many regular activities out of reach (sports, gatherings, festivals) — singing around the campfire in the backyard makes more sense now than it might have pre-pandemic.

“Music is for everybody,” Mailander said. “It’s not just for Katy Perry and pop stars that are exceptionally talented. Lots of different types of people can be musicians — not just famous people.”

As the new Neighborhood Band tune intones: “Join the chorus. Lend a hand. We’re not great. We’re not grand. Nothing’s proper! And nothing’s planned in the neighborhood band. Oooooh. It’s OK.” (In the background, a trombone plays the baseline from Let’s Go Band.)

Though The Okee Dokee Brothers’ spring and summer concerts were all cancelled — including their Minnesota State Fair grandstand debut set for this year — seeing fans taking their music and running with it has been a silver lining as they’ve watched 60 percent of their band revenue evaporate.

“Families who have been staying at home have had time to learn these songs,” said Mailander, who wishes they could have shared their new music with fans on tour.

Lansing, who lives in Denver, but who talks to Mailander nearly every day while they work on their next album — and anxiously wait for concerts to start up again — said making music a part of everyday life was another goal.

“While we’ve always talked about families singing together, this is the first time we’ve been very explicit about it,” he said. “These songs are for families to play with — change lyrics, melodies, rhymes — and make their own. I think those interactions are so memorable for both children and adults, and they can shape who we become.” 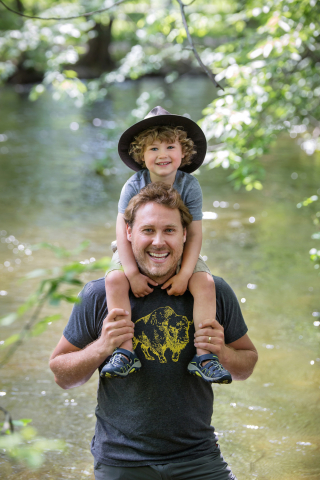 Parents and critics are applauding the brothers’ latest release as a work of art that defies genre.

“There is much wisdom, much joy and much authenticity in the music,” said one Amazon reviewer. “I never knew so much philosophy and existentialism could exist in music for kids, but I cannot recommend this album, and all their other albums, enough. Even if you are not interested in all the deep stuff I am reading into the songs, you can still enjoy the music, because it has so many levels of meaning.”

Humor — something to counter life’s hardships — was another goal for both the albums, as always, Mailander said.

Families won’t have to look far to find lighthearted tunes such as Grandmaderation (about Grandma’s quirks and knack for finding life balance), Sunnyside Up (goofy rhymes) and Let’s Throw a Party (a bluegrass version of scat singing).

One new song that may sound like yet another anthem to the outdoors — Language of the Flowers — is actually about something else, Lansing said.

“It’s about how an adult has lost the ability to hear what the flowers have to say, while a child still seems to understand,” Lansing said. “To me, an important part of our work is recognizing children’s innate wisdom and putting words to that feeling of respect towards a child.”

Mailander, as a relatively new parent, said he’s discovered that letting his son sometimes set the pace of an afternoon at home or on a long walk, has helped him and Ali discover a different way of life.

Though they set boundaries as parents, they also stay open to Hap’s ideas, even though it can be a challenge.

“He’s closer to a natural rhythm than we are, having been put through what we are as adults in society,” he said. “It’s the times that I don’t push too hard and we go really slow and we kind of breathe and find that Zen — what you’d call the state of flow — that’s when we’re really making memories and letting Hap connect to the outdoors, when we put our agenda on the back burner and really let him take the lead.” 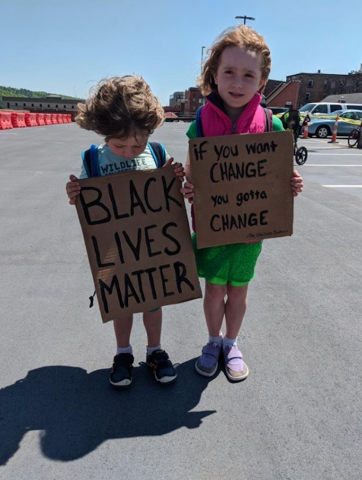 So how did they talk to young Hap about the nearby riots and passing of George Floyd?

They simply said: “George Floyd was treated very unfairly by police — and he was hurt. And we stand up for people who get treated unfairly.”

Before Floyd’s untimely death, Ali had already been participating in a race-conscious parenting group for the past two years. The group met monthly and is now motivated more than ever with plans to hire a black female consultant to help them in their work to become white allies and make future change in their families and communities.

“Understanding racism and white privilege are crucial parts of knowing our place in this country as white people — and some of the most important lessons Hap will learn as he grows up,” Ali said. “I’m learning as much as I can to expose him to these topics, however messy that might be, so that he is not learning about them as an adult, as I did.”

During the George Floyd protests in Minneapolis, a mother asked The Okee Dokee Brothers if she could use a line from their brand-new ditty, If You Want a Song, for a peaceful protest sign.

Her sign read: If you want change, you’ve gotta change.

Lansing said he felt honored that their words — often regarded as mere “kids music,” versus all-ages music, which is how the duo define themselves — resonated in such a heavy context.

“These ideas are not new,” Lansing said. “Change is important if we want to imagine a world where all people are included, because it’s clear that that’s not the case, and never has been. So, while we don’t have any of the big answers, I think this is a small answer.”

And what answer is that?

“Look at how you walk through the world, and find out where you can be responsible for change in yourself,” he said. “That’s what’s going to change the world.”

Sarah Jackson is a mother of a son and the outgoing editor of Minnesota Parent magazine.