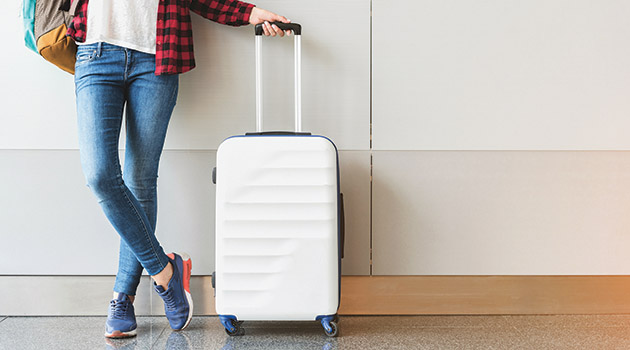 “So, I just heard that Steve Almond is teaching a class in Maine this summer,” I said to Nick, my husband.

Almond is a favorite author of mine. Maine just happens to be where we travel every summer to visit Nick’s parents.

“Really?” I said. This was, of course, exactly what I wanted to hear — there was no way I was going to give myself permission to do such a self-indulgent, impractical thing. Of course, I tried to talk him out of it.

“I don’t think it’s such a good idea,” I argued. “I totally can’t afford it. Plus, who am I kidding? A creative writing class? I should just stay home and take a webinar about how to rebrand myself as a social media marketer or something.”

“Come on, Shannon,” said Nick. “Just sign up for the class.”

The truth is, I love traveling solo. Many of my favorite traveling memories are from trips when I was all alone. But now that I have kids, traveling alone not only seems self-indulgent: It also seems … almost wrong.

Because traveling with the kids is great! There’s no denying that our trips to the Boundary Waters, the National Mustard Museum and the site of Laura Ingalls’ dugout home on the banks of Plum Creek were better because Lydia and Felix were along.

And I also love traveling with Nick. Before we had kids, we traveled as much as we could — Vietnam, Micronesia, a bike trip down Highway 1 in California and more. Ever since the kids were born, our just-the-two-of-us trips have become more modest in scale. But they’re no less important.

Torn, I tried to remember the last time I’d been truly alone. I recalled a two-day business trip I took back when I was pregnant with Felix. That was it. That was six years ago.

I signed up for the class.

When one is accustomed to suffering the indignities of air travel with young children in tow, heading to the airport alone is like a vacation in itself. The morning of my flight, my family dropped me off painfully early at Terminal 1.

Of course, it was a Kafkaesque nightmare in there. The Soviet-style line to the one open checkpoint extended across at least half the terminal. I suffered mild anxiety — if I missed my flight to Boston, I’d miss the bus to Maine and probably the first day of class — but the situation didn’t have the “end of the world” feeling that comes when you’ve got exhausted, squirming children in tow.

Once on the plane, I luxuriated in the uncomplicated reality of it all. Which of my four books would I read first? Should I put my phone on airplane mode now or wait a few minutes?

Some eight hours later, I finally made it to Rockport, a picturesque town on the coast and home to the Maine Media Workshops, where I’d be taking the class for the next five days.

I met my classmates that evening — all women, incidentally, ranging in age from just-out-of-college to well-into-retirement. After the initial introductions, I realized that apart from the instructor — a mother of three young children — I was the only student with kids at home.

Either they didn’t have them yet, weren’t ever going to or the kids were grown.

It made me kind of sad: Where were my contemporaries? My fellow mother-writers making an investment in their creative development?

Then I remembered that it had been six years since I’d done anything alone and on my own terms.

Just do it — really

I guess what I want to say to my fellow mothers is this: Whatever it is you’ve been wanting to do — visiting your friend in London, perhaps, or going to Costa Rica to do lots of yoga, say, or maybe just renting a hotel room on 494 and watching YouTube for a night or two — please, consider just doing it.

The least you can do is “waste” your time and money right now on something you actually enjoy.