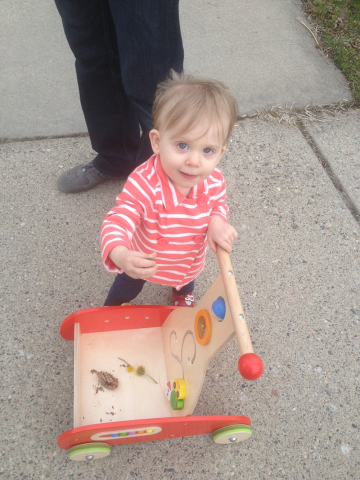 I remember how, and roughly when, it started because of what she wore: an adorable double-breasted coral-and-white-striped coat (pictured below), a gift from my best friend, that I would put her in as often as possible. Ruby was 18 months old.

She loved her little wooden push-cart, and we would push it up and down our sidewalk each afternoon. Eventually, the only aim of these trips was hunting for little objects that caught her eye: a pretty leaf, an oblong rock with a stripe across its middle, flotsam left behind by the big kids, like bubble-gum wrappers. (I know, ew. But there was no gum.)

Over time, the collection grew. It was eclectic. A marble. A hyper-miniature shoe for a very small fairy doll — she didn’t care much for the doll, but the one shoe made the cut. A penny. A seashell. A tie-dye superball.

This tiny traveling museum of fascinations really fascinated me. My little magpie daughter was the curator of a collection of “tiny things,” which is what she called them — so that’s what my husband, William, and I called them, too. It wouldn’t be far off to say it resembled a Minnesota kitchen junk drawer, but it was treasure to her.

Meanwhile, expensive toys procured by grandparents and friends languished in the corners of our house, unloved.

It was also around this time that I realized she could start to entertain herself on her own for a few minutes at a time — a blessed relief and milestone for parents — which she did regularly with her tiny things: lining them up, naming them, re-categorizing them. Sometimes there was some kind of imaginative game, conducted in the vein of how I played with Barbies.

I would find her lying on the rug in her bedroom, talking or singing quietly, rearranging them on the floor.

She was always on the lookout for the right carrying case — a little vintage kiss-lock tapestry cigarette case, a free-gift Clinique makeup bag and even a camo-printed insulated lunch bag, which came from my dad. All to hopefully never leave a single one behind at a restaurant, in the car or at her Mema and Papa’s house. Soon my brain became the catalog of — and GPS for — which tiny things we had, where they might all be, anticipating their next “lost” location.

Then I realized Shopkins and their ilk existed. I knew she’d go crazy for them, but I also remember feeling a moment’s hesitation before suggesting them for a birthday gift or showing them to her myself. In a real Gen X move, I thought her pure, ragtag collection of tiny things would be commodified and corrupted by the Toy Industrial Complex.

Suffice it to say, William built her some custom shelves to hold all her tiny things as Retail Tiny Things came into view. The collection became too unwieldy to go everywhere, but it remained a favorite pastime, and she still decorates her little dollhouse with her tiny things.

To me, this era will always be this very special part of her childhood, locked away in the baby bubble where she was incorruptible, safe, free to be just herself. I will always remember the first time I realized she was playing alone, entranced on her bedroom rug.

That was back when we played restaurant, pretending to make lemonade from the tiny lemon on a weekend afternoon; when nearly her whole toddlerhood was ahead of us; when it was just William and her and me, before her brothers.

We would take our time ranking our favorite new tiny things at bedtime, and she would run her little fingers over each one before lining them up on the edge of her lofted bed, and cuddling with me to fall asleep.

Katie Dohman is currently living in the midst of a full-house renovation with her three kids, two pets and one husband. Follow her adventures at instagram.com/dohmicile.